Smell Gas? 1 866 763 5427
News Releases
Enbridge and City of Toronto to build one of the first renewable natural gas facilities in Ontario 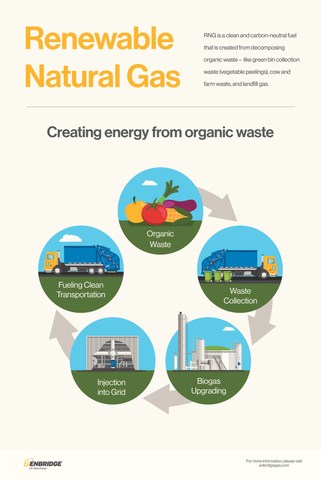 Almost 50 per cent of household waste (by weight) is organic material. When organic waste breaks down, methane is created.  Many municipalities burn the methane produced from waste facilities and sewage treatment plants, throwing away this valuable energy resource and opportunity to lower their greenhouse gas emissions.

Instead, through this facility, the methane can be captured, cleaned and used like traditional natural gas. It is carbon neutral, and has the same environmental benefits as renewable electricity.

Expected to be complete in 2019, the project supports the City's vision of using Toronto's organic waste to offset greenhouse gas emissions.  As an added benefit, the newly created carbon-neutral, renewable natural gas will be injected into the natural gas distribution system to fuel the very trucks that picked up the Green Bin waste.

"We all agree that we must have cleaner or lower carbon energy options to heat our homes and move our vehicles. While traditional natural gas is the cleanest-burning conventional fuel,   RNG is the first step in 'greening' the natural gas system.   I commend Mayor Tory and the City of Toronto for their vision and commitment and we look forward to additional opportunities to partner with and support the City."
Cynthia Hansen, Executive Vice President, Utilities and Power Operations, Enbridge Inc.

"This project represents a path to low-carbon fuel for the City and will play an important role in helping us reach our goal of reducing greenhouse gas emissions by 80 per cent by 2050. The City remains committed to its climate change action goals and to creating a more sustainable Toronto. By working with Enbridge we are able to move positive projects like this forward to the benefit of our residents and the environment."
Mayor John Tory

About the City of Toronto
Toronto is Canada's largest city, the fourth largest in North America, and home to a diverse population of about 2.8 million people. It is a global centre for business, finance, arts and culture and is consistently ranked one of the world's most livable cities. For information on non-emergency City services and programs, Toronto residents, businesses and visitors can visit http://www.toronto.ca, call 311, 24 hours a day, 7 days a week, or follow us on Twitter at http://www.twitter.com/TorontoComms, on Instagram at http://www.instagram.com/cityofto or on Facebook at http://www.facebook.com/cityofto.